Slipping Into Darkness, opening the 13th of December 2019 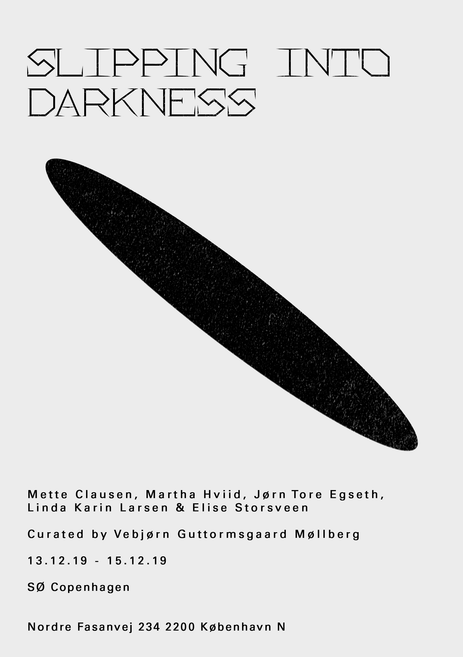 I can sense something coming. Something slithering and squirming its way towards us. I get this weird, metallic taste in my mouth.

A cold breeze. I think I can almost touch it. It’s like it wants to be touched.

- Imagine Pesta, Theodor Kittelsen’s character from the Black Death series, arriving with its rake and broom.

We have waited patiently. Prepared, preserved, and we have tried to keep things alive. We have harvested, pickled, dried and fermented food and materials. Now we cover the walls with textiles, dream tapestries that you can get lost in. Fabrics that isolate and keep us warm.

-Listen to the sea: The pumping pulse of a deep blue something. Steady, calm swells, lulling us into a meditative state.

The tyranny of the same. We tell each other: Fear is only a dream. Sorrow is just a nightmare, a long dark passage. We try not to look, and they try not to look at us. We want to stay focused.

We are in the middle ground between light and shadow.

I hear a sound and turn my head. The Christmas shopping tourists melt into the architecture. Taking the shape of a wave, a massive wave cast. Everything freezes for a minute. One single deep breath. I slip and fall into it.

Mette Clausen (b. 1980) is educated from The Royal Danish Academy of Fine Arts. Lives and works in Bornholm, DK.

Martha Hviid (b. 1987) is educated from The Royal College of Art London and University of Texas at Austin. Lives and works in Copenhagen, DK.

Jørn Tore Egseth (b. 1984) is educated from The Trondheim Academy of Fine Arts NTNU. Lives and works in Oslo

Elise Storsveen (b. 1969) is educated from The Norwegian National Academy of Fine Arts and SHKS. Lives and works in Oslo.