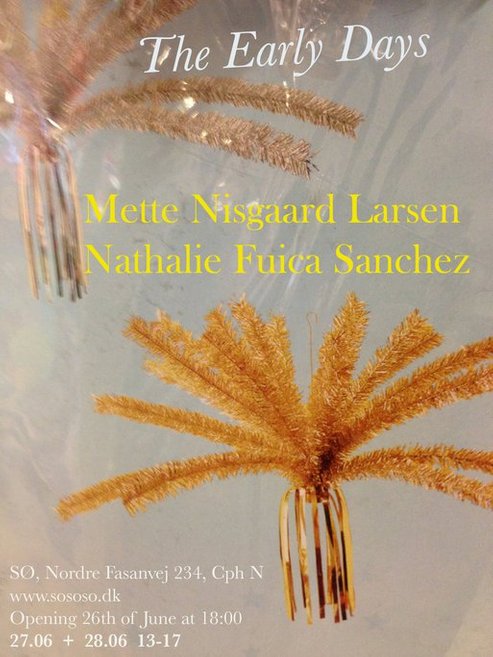 She consistently works with tools such as transfer, blindness and reproduction, to keep the working situation as open and intuitive as possible. She then dislocates the situation by including sculptural, linguistic and performative elements to gently displace the understanding of the objects and the order of the work.

Her work has a certain ethereal vibe inspired by old pictograms, gestures and odd holistic ads. She has a little naive attraction towards everything that comes in color graduations. Such as shiny pants or paper from the eighties. Her pictures are made on an almost introvert note, using the repetitiveness of the imagery to insist on the authority of its simplicity.

Mette Nisgaard Larsen graduated from the Royal Danish Academy of Fine Arts and lives and works in Copenhagen.

During her last three years Nathalie F. Sanchez (b.1985) has focused on studies in ceramics at the national academy of arts in Oslo, while at the same time continuing her practice within a variety of mediums; Performance, sculpture, video, painting and photography.

Eclectic sources of inspiration as well as a process based and spontaneous development of form and content contributes to her broad spectrum. The works shown at SØ explores interior design, applied arts, corporality, sensuality and her exploration of concepts such as purification and potential. 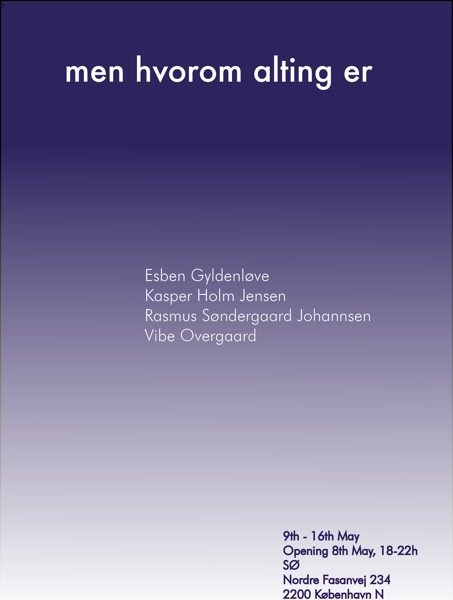 October 24th, 1901: at the age of 63, Annie Edson Taylor gets into a custom made barrel, in which she is swept over the Niagara Falls. The height of the free fall is 52 meters. She is the first person to survive this attempt.

Accompanying the exhibition: A release of the publication "F 00115" in cooperation with Röj Forlag. (www.rojforlag.com)

The exhibition was part of the 48 Timer- festival in Nørrebro (www.48timer.com)

Intangible Presence - On Katharina Monka’s A 00114

Katharina Monka’s “works”, her materials inserted into space, do not stand out, nor do they take centre stage, and they do not fulfil the expectation that something is being exhibited. Rather, they draw back from the gaze and diffuse themselves, as it were, through the real exhibition setting. In this way, everything actually stands out, everything becomes important, ever co- rner, every gap, every detail. There is neither a centre to be found in the spatial, nor a closure in the temporal. Everything the gaze skims over is part of the viewer’s present in space.

The work A00114 underlines this present presence through a permanent action. Here “exhibition” is not a state, but a perfor- mative event – without possessing however the finished character of a work. A constant, albeit very restrained action fills the exhibition space. The gallerist slides the construct made of furniture timber to one side, removes a covering panel and sets it aside, later moves the graphics cabinet to another place and does what is part of his task: he takes pictures out of a draw and hangs them on the wall. Everything can be shifted around, is movable and is cleared away again. The arrangements the galle- rist creates do not result in a fixed ensemble. But the pictures, the photographs which the gallerist hangs also remain mostly almost blank. Some show spatial situations or details similar to the present exhibition – or a blank, blackened surface. Again, the gaze does not find a motif.

A few other photographs detach themselves from this connection to the present setting however. The gallerist hangs a glassed photograph; out of its lightly coloured surface, in the middle, something like a piece of rolled-up skin protrudes, ever so subtly shaded into reddish tones and covered over with a milky mass. Another small colour photograph barely allows a blurry nude figure study to be discerned. A large photographic print, which the gallerist unrolls on the wall, shows a male nude, black and white, life size, in frontal pose with raised hands. The work information describes him as “a man as Olga Desmond”. There is also a photo of a black plastic object that looks a little like a head or a Surrealist sculpture, apparently a “butt plug as Madon- na”. Just as beautiful and inexplicable is the text describing the bird-of-paradise “Arfak parotia”. They all unfurl a haunting presence in this still setting, which is however breached by none of them.

An interpretation, an explanation is not offered. But it is precisely because of this that the pictures have such a powerfully haun- ting impact – through their disconnectedness and strangeness in the present emptiness of the exhibition space. What remains and what makes up the “work” is this sweeping, unfixable and fascinating experience, its intangible presence. 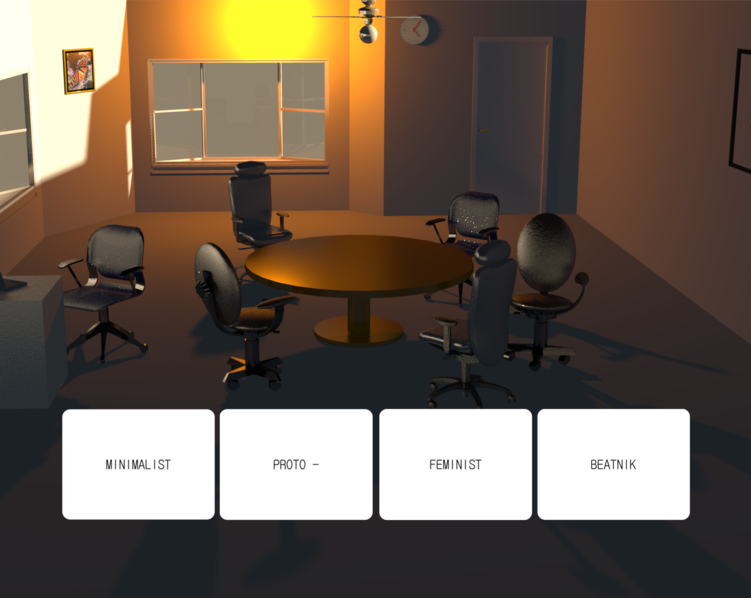 YOU ARE A WORLDBUILDING MACHINE

AN EXCESS OF INTELLIGENCE

THIS IS THE G.S.C. [Garden of Surplus Creativity]

Unhappy with your role and or influence in society?

You are invited to be reassigned a new profession via an artist made card game, DOHL.

A projection of a conversation into a future, any future. 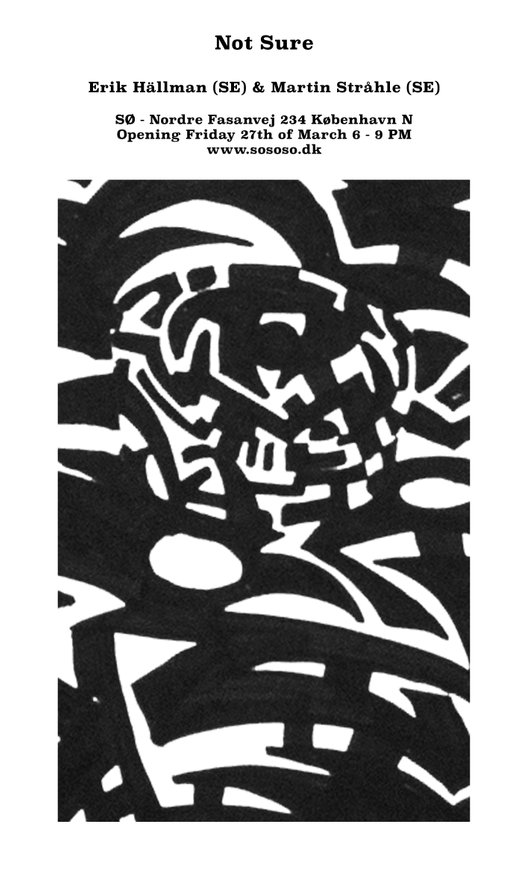 Female Reporter: Started off boring and slow with Not Sure trying to bullshit everyone with a bunch of smart talk: «Blah blah blah. You gotta believe me!» That part of the trial sucked! But then the Chief J. just went off. He said, «Man, whatever! The guy`s guilty as shit! We all know that.» And he sentenced his ass to one night of rehabilitation.

The Lion, the Heart and the Potato 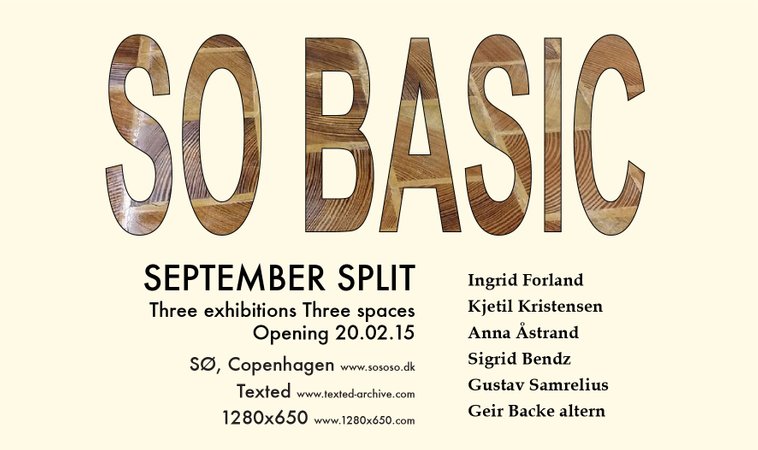 An ever expanding collective force. Primary colors and tiny blocks of wood changing the landscape.

So physical. So playful. So organized. So vast

Like a cave woman making sense of utter nonsense.

September Split is an artist-run organization and collective that was founded in september 2011 to help and challenge selected artists to travel and exhibit abroad.

The collective has an ever increasing member base and expanding disiplines. It's members are based in Oslo, Stockholm, Copenhagen and Fredrikstad and have exhibited together in Genoa, Barcelona and Detroit.

The exhibition SO BASIC simultaniously took place at the textbased online magazine Texted, the web gallery 1280x650 as well as at gallery SØ in Nørrebro. 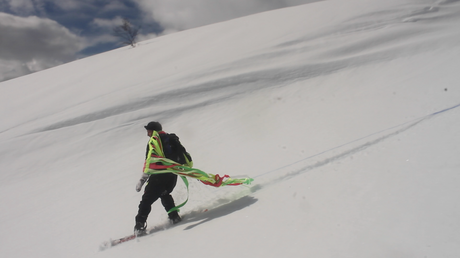 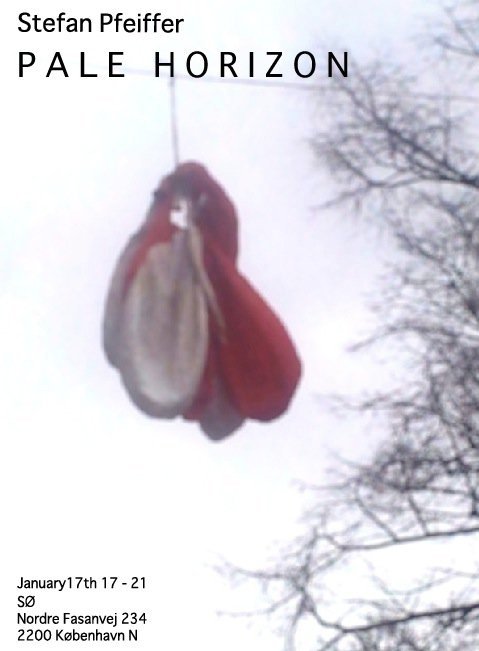 well, what do we expect?

or maybe even roses?

the sound of explosions?

oh no, is this any easier?

decorations up or down?

the sound of explosions ? what does this tune signify?

what is its meaning?

is it really that straight forward?

or are our ears beyond words? 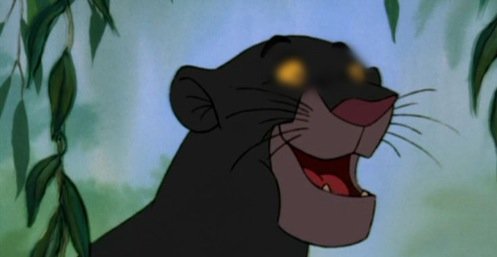 In their debut- collaboration at SØ, Philipp Höning and Maarten Van Roy will work from the lowest common denominator of their individual (usually counter-parallel) artistic interests and we are very excited to share the outcome with you.

Maarten, who "works faster than he thinks" and always has a plan, functioning as a trap for the unplanned to take place and Philipp, who aims to "go in with a lot, go out with a lot and leave little behind" will develop a series of works during their stay in Copenhagen.

The key to this working union may lay in their shared interest in (image-) pairings, the double and comparative viewing -

on the other hand, the title „Shell Shock“ along with Bagheera´s thousand-yard- stare suggest an examination of traumata. 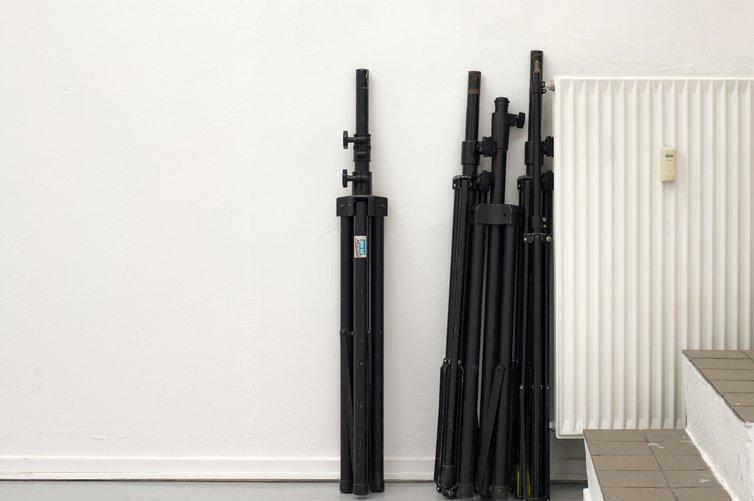 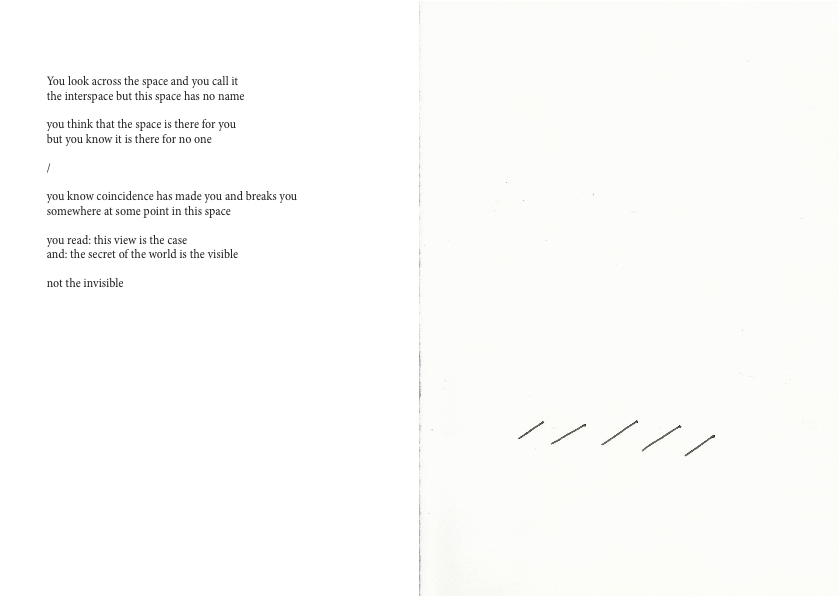 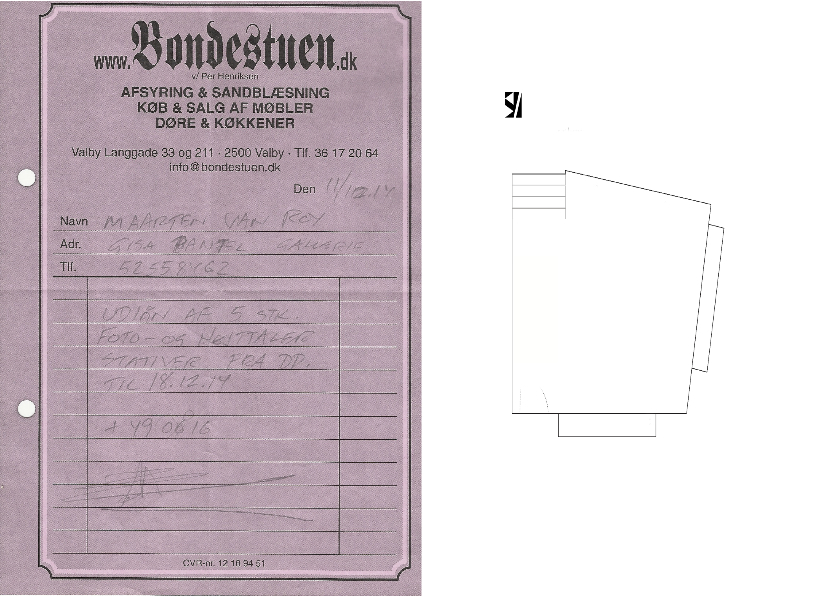 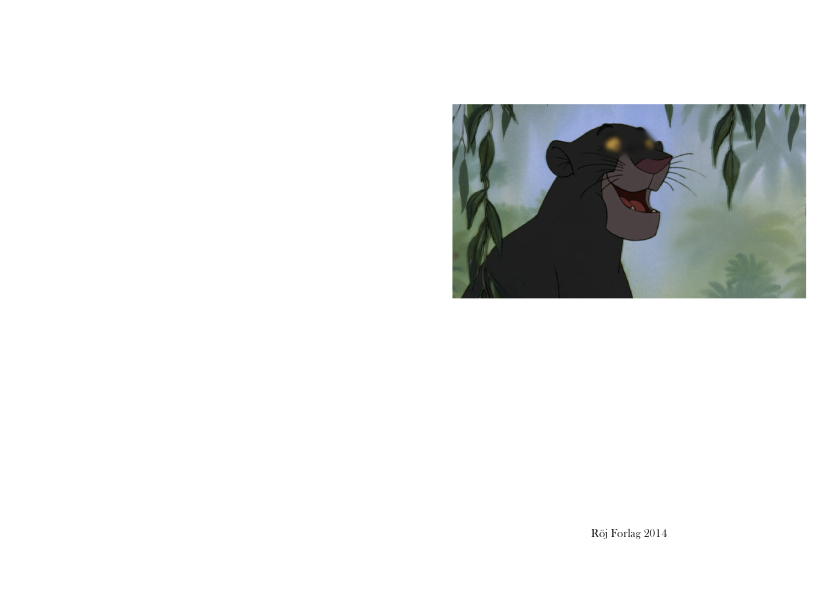 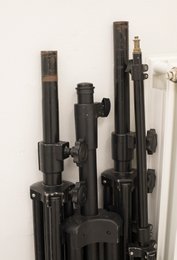 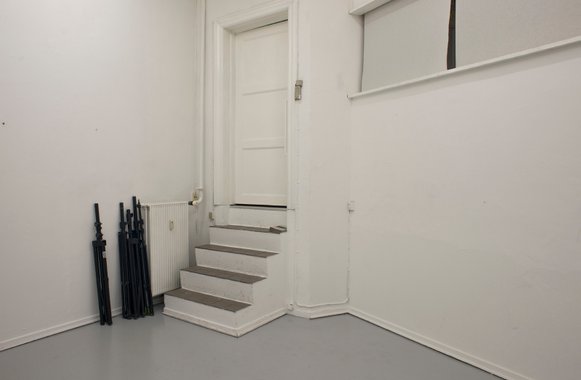 The second of five exhibitions in the exhibition series Sig mig, at tingene taler. 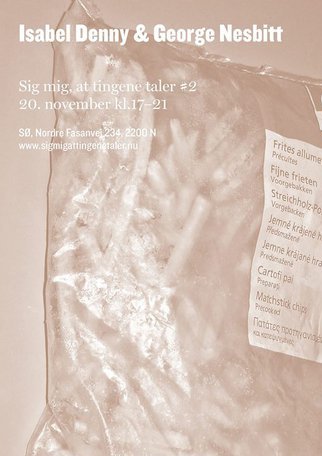 George Nesbitt, Untitled, video (With thanks to David Malik), 2014

George Nesbitt, Untitled, video (With thanks to David Malik), 2014

The puppet turns throughout the script

Moving from A to B - In between there are markings outside the line.

A man walks up a hill, his arm falls off

Second day on the walk he loses another arm

On the third day he seeks out to a higher spirit

On the fourth day a leg is gone

On the fifth day he screams for help, stretches his arms towards the sky and falls flat on solid ground

The sixth day his other leg crumbles away together with his teeth, ears and nose

On the seventh day a dream occurs – a muddy flowerbed with eating sharp teethed rodents, crawling among the roses, in a quiet garden.

Sneaks in - dries up 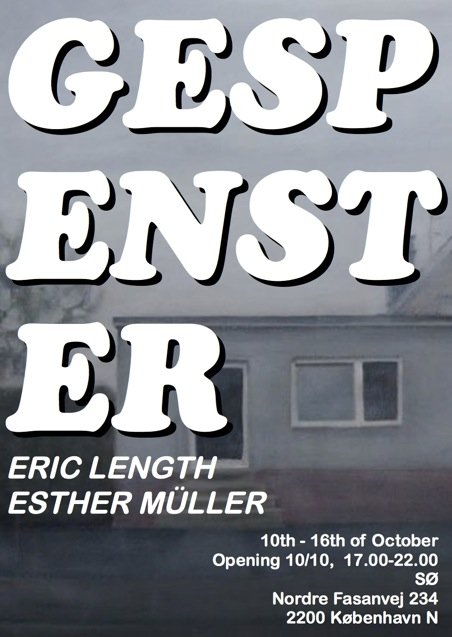