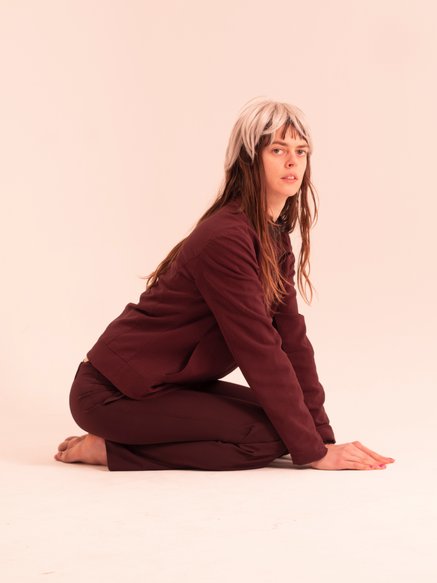 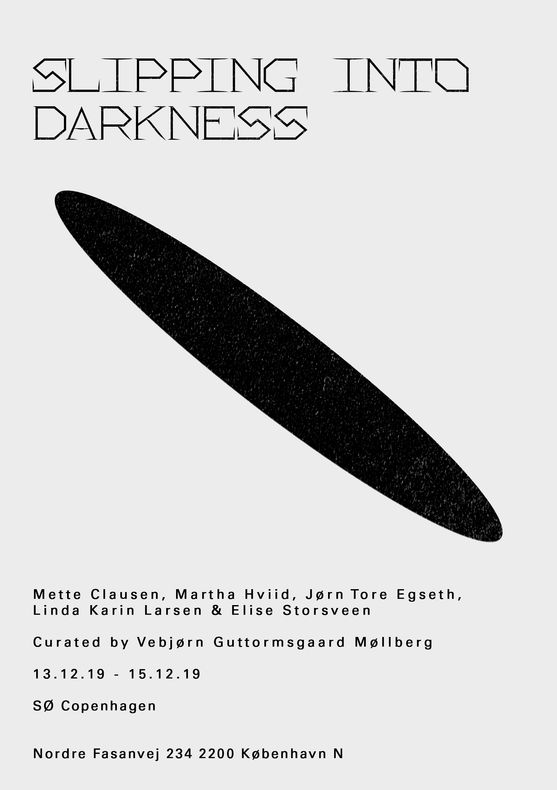 I can sense something coming. Something slithering and squirming its way towards us. I get this weird, metallic taste in my mouth.

A cold breeze. I think I can almost touch it. It’s like it wants to be touched.

- Imagine Pesta, Theodor Kittelsen’s character from the Black Death series, arriving with its rake and broom.

We have waited patiently. Prepared, preserved, and we have tried to keep things alive. We have harvested, pickled, dried and fermented food and materials. Now we cover the walls with textiles, dream tapestries that you can get lost in. Fabrics that isolate and keep us warm.

-Listen to the sea: The pumping pulse of a deep blue something. Steady, calm swells, lulling us into a meditative state.

The tyranny of the same. We tell each other: Fear is only a dream. Sorrow is just a nightmare, a long dark passage. We try not to look, and they try not to look at us. We want to stay focused.

We are in the middle ground between light and shadow.

I hear a sound and turn my head. The Christmas shopping tourists melt into the architecture. Taking the shape of a wave, a massive wave cast. Everything freezes for a minute. One single deep breath. I slip and fall into it.

Mette Clausen (b. 1980) is educated from The Royal Danish Academy of Fine Arts. Lives and works in Bornholm, DK.

Martha Hviid (b. 1987) is educated from The Royal College of Art London and University of Texas at Austin. Lives and works in Copenhagen, DK.

Jørn Tore Egseth (b. 1984) is educated from The Trondheim Academy of Fine Arts NTNU. Lives and works in Oslo

Elise Storsveen (b. 1969) is educated from The Norwegian National Academy of Fine Arts and SHKS. Lives and works in Oslo.

Linda Karin Larsen, A New Value System With Images and Symbols That Connect Us to Each Other and to The Planet - Towards a new consciousness, Video-loop w. sound, 2018

Anders Hergum (b. 1983, NO) is a graduate of the Art Academy in Bergen and the Royal Danish Academy of Fine Arts. Recent exhibitions include «Fassadenplanung» at Saksumdal Tempel, Lillehammer; «SUV» under the auspices of FSC at Basement, Leipzig; «Alt_Cph» under the auspices of SØ at Fabrikken, Copenhagen and «Red Yellow Summer» at Kunsthalle 44, Møen. He recently returned from a residency in D’Kar, Botswana after having been invited by the Kuru Art Project. Forthcoming exhibition 2020 at Surdez ApS. 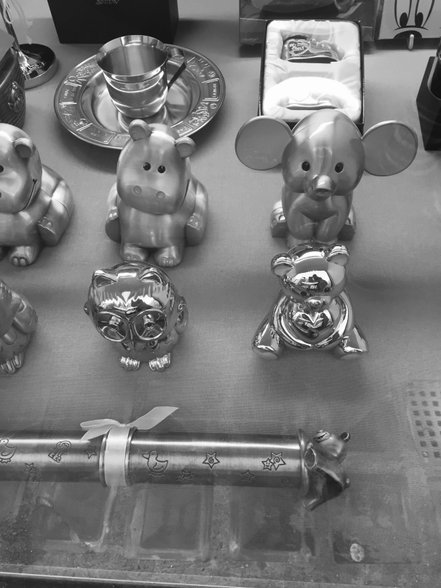 She is based in Copenhagen and has a MFA from the Royal Academy of Fine Arts. She has exhibited at Vermilion Sands, EXTRACT Gl. Strand and Den Frie Udstillingsbygning. Julie Riis Andersen has contributed to the publications Eye Attack – op art and kinetical art, Louisiana Museum of Modern Art and Hundrede manifester/BD Gladiator- Krabbesholm. She has been awarded by 15. Juni fonden and Ole Haslunds kunstnerfonden. 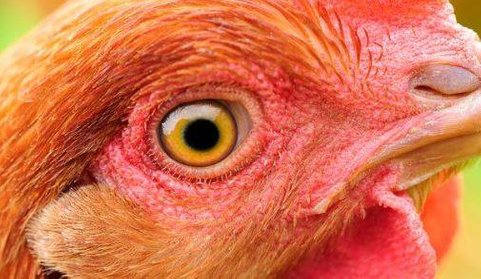 Snap when silent by David Nilson and Louis Nitze, September 2019

David Nilson (b. 1982, SE) works with sculpture. The objects in his imagery are not big and expressive. Instead they hold a quiet subtlety that have become his hallmark. The unexpected fountains, the icicles in the sculptural installation January or the lamppost that carries a half-moon, takes up space by being misplaced and redundant from its original time and situation.
Nilson lives and works in Malmö where he did his MFA at Malmö Art Academy 2013. He has previously exhibited at e.g. Kristianstad Center for Contemporary Art SE, Krognoshuset Lund SE, Casey Kaplan Gallery NY US and The Royal Art Academy Stockholm SE. Currently he is also participating in two group shows at Arnstedt Gallery SE and at Restaurant Riche Stockholm SE. He is represented at Public Art Agency Sweden, Gävleborg

Louis Nitze (b 1990, DK) is working within the field of painting. He is educated from Valand Art Academy in Gothenburg and through his practice he investigates human behaviour in the light of the anthropocene epoch. Beside from his artistic practice he works as an art educator at Louisiana Museum of Modern Art. His previous exhibitions include Alingsås Museum (GiBCA Extension), Gothenburg City Museum Galleri Konstepidemin, National hospital of Iceland, Den Frie Udstillingsbygning, Gallery Raja and Galleri Monitor.

Only Sunshine Available by Emil Keller Skousen and Henrik Sørlid, May 2019

Beatrice Alexanian (b 1991, DK) is working upon the principles and the potentials within sculptural and architectural circumstances as in carriers or containers. She is educated at the Art Academy in Oslo and Athens School of Fine Arts. Previous exhibitions include Kunstnernes Hus Oslo, Podium Oslo, Søby Summer Sculpture ’18 Biennale, TAM Veliko Turnovo, Teater Tribunalen Stockholm, The Italian Embassy in Athens, Hamburger Bahnhof Berlin, Galleri Tom Christoffersen, Goethe Institut Ramallah.

Kirstine Bjerre (b. 2000, DK) is working with ideas of energy, human behavior/experience, spreading the word of equality and cooperation for the dream of an ultimate society. Kirstines paintings range from large scale figurations and symbolism to smaller and more intimate formats. She has been a student at Billedkunst A og Billedkunst B på VERA Skole for Kunst og Design and Akademiets Skoler, Tegne og designskole.
Previous exhibitions: 3 paintings at PVC, Åboulevarden 9C 1635 København V and at Sagro, Birk Centerpark 24, 7400 Herning

Agnes Guttormsgaard (b.1954 NO) is a textile artist living and working in Notodden, Norway. She is educated from SHKS in Oslo (Now known as KHIO) and early in her career she made big sized commissioned tapestry work for hospitals, prisons and other public buildings in Norway. In the last years her work has been smaller in size. She works with the old indonesian IKAT dying technique, and makes transparent tapestries with nordic folklore ornaments contrasting abstract minimalism.

Elisabeth Thorsen (b. 1981 NO) is a Norwegian shoemaker and artist.

She graduated from the Norwegian shoemaker school in 2008 and has been making art out of shoes ever since. She approaches her projects with a unique angle as she is making pieces of art, not merely functional footwear. Her shoes have an aesthetic expression, pleasing to the eye as well as challenging to fully grasp. She likes to craft her shoes experimenting with unusual material not commonly used for shoemaking. Recycled material such as furniture, pencils, carpets, drapes and other unusual material such as ice, sugar and sports tape has all been included in her work.

Her inspiration is from fairytales, nature, art and 70s movies. She also does performances both live and in video productions. Her previous work has been shown at: Kunsthalle Budapest, Kunsthaus Wien

Alina Vasilchenko (b.1982 RU) is an artist and filmmaker based in Moscow. Her videos portraits modern people in a rapidly changing world, where they are looking for something that will remain constant.
Alina, born in Moscow in 1982 has studied filmmaking in the oldest Russian film studio at "Mosfilm filmmakers course" in 2008, which gave her the possibility to learn from professionals who worked with masters as Tarkovsky, Konchalovsky, Paradjanov. «Having worked as a film producer assistant for several years, I decided to try to make my own films using the experience and the simple technical equipment I have at hand»

Alina has shown works in Rostov-on-Don, Berlin, Fankfurt, Saint-Petersburg, Cairo and many other places around the world, she participated in several international online projects. In 2015 she was one of the nominees of the Lichter Art Award in Frankfurt with "I Like Going to Pet Stores".